Holy Vessels in the Divine Worship

To visitors of smaltotechniki.gr, today we are presenting subjects related to the Holy Vessels used in the Divine Worship. Perhaps in Greece, these Vessels comprise the first contact of the believer when he attends the Liturgy to follow the sacred devotionals and to participate in the Divine and Untainted Mysteries. Our emigrant brothers do not have the opportunity to marvel at the pulchritude of the Sacred Vessels (unsurpassed in art and technique) which are made to withstand the test of time. Samples of such objects are found in every  great Monastery and Church. So, we are presenting you the Vessels and their use. The samples you are going to see, are created by using enamel, a technique that has existed for many centuries (tο which you will be introduce in another article). This artwork is made by Mrs. E. Christodoulou in Athens.

They are divided into two categories.

Sacred vessels necessary for the performing of Eucharist (Holy Communion) are:

It must be separated from every other Sacred Vessel, because the Holy Body and Holy Blood are placed into it.

The faithful receive the Eucharist from it and it symbolizes the Grail used by the Lord in the Last Supper. 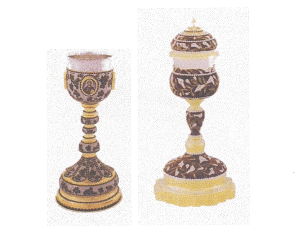 i) The Holy Bread is placed upon it, in the Liturgy of Preparation (Proskomedia). It symbolized the Crib (Crèche), where the Divine Infant lay on.

ii) Asterisk consists of two curved strips of metal  that open like a star. It is placed on the Altar  to protect the Holy Bread from the Sacred Veil and Aër . The Asterisk reminds us of the Bethlehem Star. 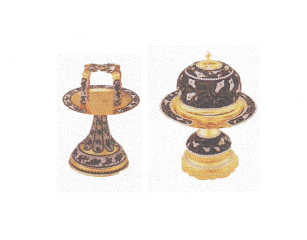 i) It is a small spear like a knife. It reminds us of the Holy Lance (Lance of Longinus) that pierced the side of the Lord, as he hung on the Cross.

ii) It is a spoon used to distribute Eucharist. In the old days, tongs were used to avoid the danger of crumbs being accidentally dropped on the floor. 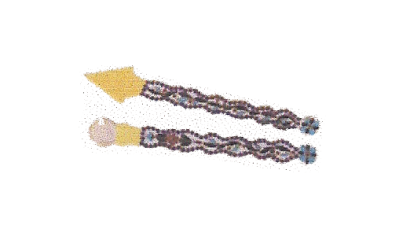 d) These are two sponges.

The Sponge serves to clean the Holy Grail.

It is a small pot, which heats the water that is poured into the Holy Grail afterwards. It reminds us of the fervor that our faith must have. Zeon is also called the boiled water inside of this Vessel. 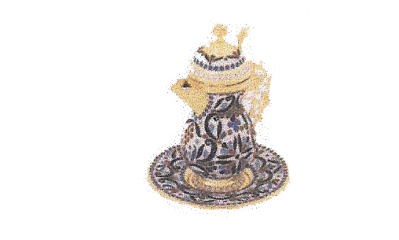 It is a metal vessel usually in the shape of a small church. It is located on the Holy Altar and inside of this, is kept the Unsullied Body of the Lord immersed in the Holy Blood. It is used  for urgent matters (Eucharist for seriously ill people etc.). Apart from  the big one, there is also the small tabernacle for transferring Eucharist to the patients. 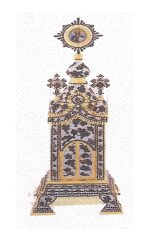 Other Sacred Vessels and Objects

Other sacred vessels and objects generally used in the Divine Worship are: 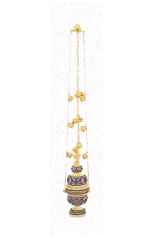 Usually burn oil in front of the Royal Doors (Beautiful Gates)  and the Holy Icons. Their oil reminds us of the compassion of God and His light in our lives, which must be bright and holy. 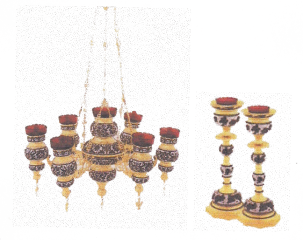 They hold candles and taper candles. Candles represent our malleable hearts that should be influenced by the word of God and the fact that they should melt from Divine Love. 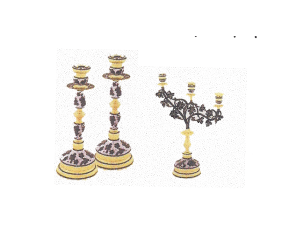 Usually they are metal discs on poles. They represent Angels with six wings, to show how fast they can carry out the Will of God. They are used in the ecclesiastical litanies and ceremonies. 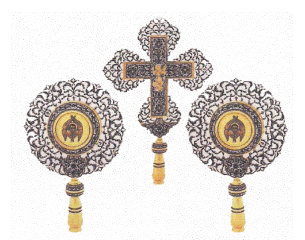 Inside of it, the Holy Baptism takes place. It symbolizes the Jordan River, where Jesus was baptized. The baptismal basin is located in the Holy Temples. In the old days, when the baptisms were performed at home, the churchmen carried them to the houses of the faithful. Many of the emigrants used the baptismal basins originated from the villages or cities they came from. 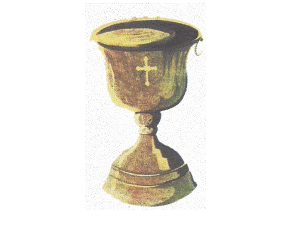 It is a metal vessel where the Holy Myrr (Myro) is kept for the mystery of Chrism, during the Baptism of the people who have already been chased. 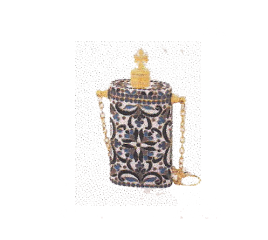 The Holy Gospel is kept on the Altar. From it, the priests or deacons read the proverbs of the Evangelists. During the Liturgy, after the reading of the Evangelion, the faithful always embrace it and it remains at believers' disposal for bussing until the end of the Divine Eucharist.

Inside this is kept the Body of the Lord soaked in Holy Blood, placed there before the union of Artos (Bread) and the Wine with Zeon, during the Divine Eucharist during the Great Lent. It is used in the special liturgical service called Divine Liturgy of the Presanctified Gifts, which has a distinct hymnography and order. 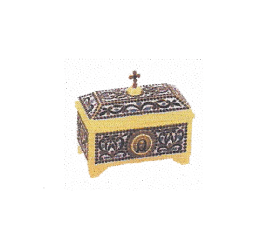 In this box are placed the Relics of Saints. A reliquary is always placed on the Altar or at certain places of safekeeping. 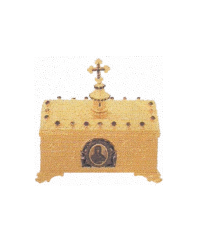 They are metallic conical objects. Their melodic sound, invite us to enter the temple. Joyful or mournful events are announced by them.

Everything in the temple illustrates and symbolizes the Heavenly Church, as the Bible teaches us. They are there "for example and shadow of the heavenly" (Heb. Chap. VIII. 3-7)